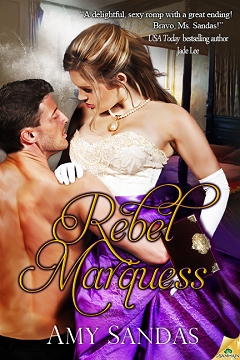 And then we have book three in the series, the cheeky REBEL MARQUESS, released April 2014

He came to a stop directly in front of her. So close she had to tip her head back to continue meeting his gaze. He took a moment to slide his gaze over the inquisitive arch of her eyebrows, the richness of her earthy eyes that flashed with humor, and her lips. Lovely full lips curved in a mischievous smile that was beginning to falter.

“You should not be so free to challenge a man’s strength and virility.”

Something of the fierce arousal racing through his veins must have shown in his face, because the last remnants of her smile slipped away and she took a step back. The pulse in her throat fluttered. “I…I didn’t.”

He had intended to scare her a little—let her know she had crossed the line. But he could not seem to stop himself from pushing her a bit further.

“You would not want me to prove you wrong.”

She stared at him. Her gaze was bright and intent. Her posture tense and ready. Then something changed. There was a flicker of something elemental in the depth of her eyes.

Desire clamored clumsily through him, urging him to accept her unwitting challenge. He grasped her upper arms and drew her toward him as his gaze fell to her mouth again.

God, he wanted to kiss her. Test the lush surface of her lips, taste the secrets of her tongue. The warmth of her body saturated his clothing and the softness of her curves crushed against him, begging for further exploration. The base desire to possess rose darkly within him and he battled to maintain control.