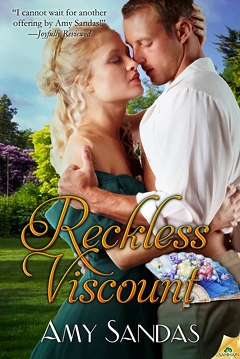 And on to book two in the series... RECKLESS VISCOUNT, release June 2013

Taking the chance that she was alone in the room, she carefully rolled to her side in the bed and then stopped abruptly as she met the gaze of the very same man she had just chased from her thoughts.

Leif sat slouched in a small wooden chair set squarely to face her less than a foot away from the bed. His legs were bent and braced wide apart and his elbows rested on the narrow armrests. His hands hung lax over his thighs and his eyes were trained on her face.

Abbigael’s already frantic heart jolted against her ribs as a very different degree of awareness raced across her nerves.

He watched her from beneath lowered eyelids and a rough growth of beard shadowed his unsmiling mouth. His hair was tousled, his clothes were a wrinkled mess and he was without a cravat.

He looked frightfully appealing even in his mussed state.

Abbigael’s first fleeting thought at seeing him was relief that she had been saved. But it was followed immediately by a swift invasion of clarity as she realized he had been watching her for some time, silently witnessing her return to consciousness and the dawning realization of her situation. He had seen her fear and panic rising and had done nothing to stop it.

If Lord Neville wasn’t her hero in this scenario, then he was the villain.