They’ll risk their hearts and their lives to expose the darkness concealed within the elegance of London’s high society. 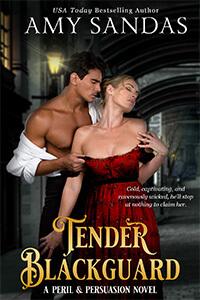 A childhood in the rookery taught Lark Evans two things; how to survive in a perilous world and that people deserving of loyalty are rare and precious. When her closest friend goes missing after sending a cryptic warning, Lark has only one option. She takes a position as housekeeper to the mysterious Lord Warfield, hoping to gain access to the dark and elegant world from which her friend disappeared.

Alastair Blackwell never wanted his father’s wealth and title, but upon the Marquess of Warfield’s death, he discovers a secret too malevolent to ignore. A secret that links back to Alastair’s mother and his own ignoble birth. To purge the demons of his past and prevent others from suffering a similar fate, he vows to destroy the arcane world his father once ruled.

As Lark creeps ever deeper into the shadows surrounding the gentlemen of Curzon Street, everything suggests her handsome, enigmatic employer is one of them. She fears her fascination with the man is clouding her better sense and diverting her from her purpose. Still…despite his cold, wicked gaze, her instinct urges her to trust him.

When Alastair looks into the rebellious gaze of his staid and proper housekeeper, he knows she’s hiding something. He soon discovers her quiet manner masks wounds as deep as his own and a heart far braver than any he’d ever known. He should keep her as far as possible from the evil she seeks, but she could be the key to ending it all.