Has London's most elusive bachelor finally been caught? 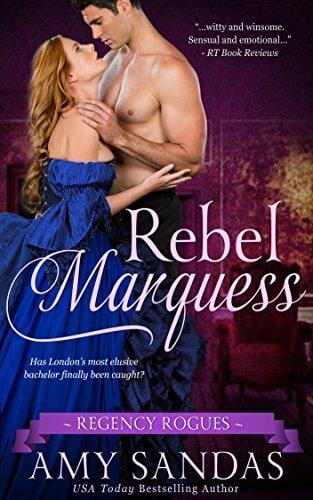 The Marquess of Rutherford has been avoiding the marriage noose for years. The last thing he expected was to end up engaged to a woman with even less desire to marry than he has.

Eliza Terribury is the last of seven daughters to have her London debut. Her mother is desperate to see her matched with the elusive Marquess of Rutherford, but Eliza has no intention of marrying anyone. Her dream of becoming a published novelist would never survive the limitations of life as a gentleman’s wife.

Michael Gerard, the Marquess of Rutherford, has bowed to the duty of his position all his life, but the choosing of a wife is something he will not be pressured into. Unfortunately, he did not expect fate to take a side and throw Eliza Terribury in his path at every turn. And he certainly did not expect the rush of attraction he feels for the impertinent young woman.

When a completely innocent incident leaves Eliza and Rutherford with no choice but to announce an engagement, they agree to go along with the betrothal only until they can find a way out of it. As Eliza’s free-spirit charms Rutherford despite himself and Eliza discovers there is more to the arrogant lord than meets the eye, what began as a tentative friendship becomes something deeper. But is passion enough reason to take a chance on forever?